Where was Clue filmed Clue was filmed in Los Angeles in the United States of America.

Scene where most of it was filmed in a studio, or edited, but driveway scenes and foundation are used

Scene was shot Built in 1929 for Jack P. Atkin, this 21-bedroom manor was designed by famed architect Paul Revere Williams who was the first black member of the American Institute of Architects. The mansion was destroyed in a fire in 2005. 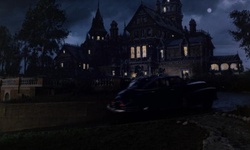